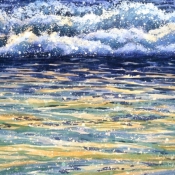 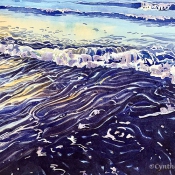 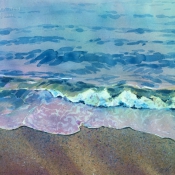 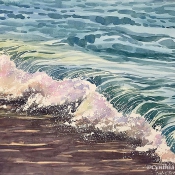 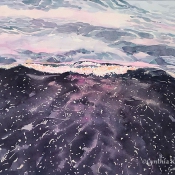 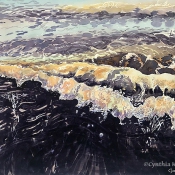 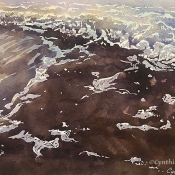 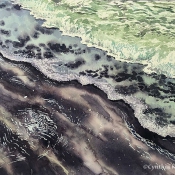 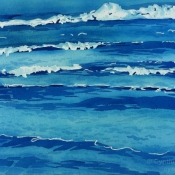 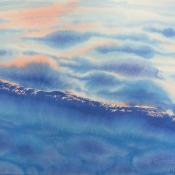 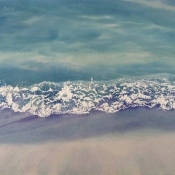 The watercolors in the series, “Drawn by the Sea,” are based on photographs and memories of beaches I’ve visited, mostly in the Gulf coast area, especially Galveston, Texas. Other areas include the coasts of Oregon, Costa Rica, and Florida – all beautiful and inspirational.

I didn’t grow up near the ocean; I’m not a strong or enthusiastic swimmer; I’ve never been on a cruise or spent much time on a boat of any kind. But as a child, going to the beach was a major thrill — and I always hoped for big waves. Even now, catching the first glimpse of the ocean, usually at the Seawall in Galveston, causes an involuntary rush of excitement. The urge to get to the edge where water meets land is irresistible, and then wading in is inevitable.

While the ocean is my favorite body of water, I’ve also painted lakes, rivers, and streams. Water is a complex subject to depict; colorless, it borrows its hues from the surroundings, such as sky and sand. Along with the reflected color, depending on depth and transparency, objects and colors may be seen beneath the surface of the water. There can also be objects floating on the surface, along with froth or foam usually present.

I truly am drawn to the sea, and in painting these captured moments of the motion of the waves, it’s easy to recall the attraction I felt when photographing the scene. I’d like to think that in enjoying these watercolors, an observer could also feel transported to a time of mindfulness and peace on the beach.